Did a beautiful ride this morning from the Rubel Pocket Rides series. From "Beyond the Minuteman Bikeway, Bedford", no. 10 is "The Watertower Ride", featuring our own water tower here in Arlington Heights. It's listed as a 32-mile ride, but I cut a couple miles off by riding up the bike path to the Bedford end, where the ride officially starts.


On the bit that I cut out, there seems to be lots of twisty-turny-ness that I see little point to. Perhaps its a nice alternative to the bike path, which I guess could grow monotonous for some. The bike path was ideal for me when I set off around 6:30 since it wasn't quite light enough to see my queue sheet!


In any case, the weather was perfect early Autumn weather - leaves just beginning to fall, mid-40s and clear. The route is wonderful because it takes in beautiful countryside and also lots of genuine points of interest, like the Old North Bridge, Concord River (2 crossings), Walden Pond, and the Decordova museum. The other really nice thing about this ride is that it's easy to navigate - not more than 4 or so major turnings if you do it like I did.


A couple comments on the route:


On the bright side, that little brush with my own mortality gave me the boost of adrenaline I needed to power back up the hill to the water tower before heading home.

Cyclofiend is a fun site with pictures of people's bikes. Here's the entry about our Christiania.

I'm not sure where the name of this blog comes from, but it's a very interesting site nevertheless, all about internally-geared bike hubs. (Which describes the gearing all of my bikes - the Fahrrad Manufaktur, the Thorn Raven, and the Christiania trike). One very interesting recent post is about a new Rohloff hub with greater range, smaller size, and less weight.

Posted by Andrew at 8:10 AM No comments:

It's not as disasterous as all that, I just have a flat and no means to fix it.

I should have seen it coming. I've had a slow leak in front for weeks now, and it's only meant that I need to top up before I head out. Today, though, I thought I felt a little low but I set off regardless since I was running a little late.

But by the time I set off from South Street, it was pretty soft. I considered asking the gang of bike couriers I alway pass by at their financial district hangout if I could borrow a pump, but I didn't think it was a necessity then, and, sure, they're also pretty intimidating. Especially in large numbers, at leisure.

So I kept going. I bottomed out near Kendall Square, and I think I probably got a snake bite puncture, and from there, the end came swiftly.

I resolved to taking it on the Red Line to Alewife, locking up, taking a taxi, and returning with the car. But then Jim called and now the girls are coming to get me and the pizza I've ordered from Emma's' which I've alway wanted to try! I also squeezed in a quick beer at Tommy Doyle's' which certainly helps take some of the disaster out of it all.

Posted by Andrew at 6:59 PM No comments: 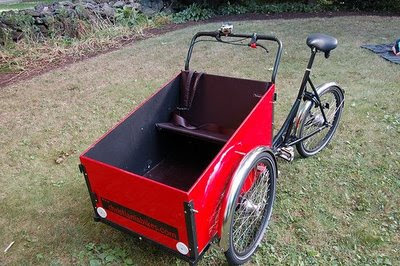 Here's our Christiania unladen. See more photos here.
Whenever we venture out in the Christiania trike, we get lots of stares and curious questioners. Here are answers to some of the questions we get most often.

Can I have a closer look?

Sure! Here's a bunch of photos. I'm happy to arrange to meet in Boston with anyone interested.

Did you make it yourself?

I'm afraid not. It was built by hand in Denmark by a small company called Christiania, after the commune settlement in Copenhagen where the company was founded (and based for a long time - but they've now moved, and the settlement is under threat from the government). See the Christiania Bikes website for more information (and some photos of us!) or this page for all the specs.

I feel very safe riding it, and I have no reservations about riding with my two small daughters. The construction of the trike is very, very solid. The box is thick plywood, and the rest of the bike is steel, with very good quality components throughout. It has a coaster brake on the rear wheel and discs on the front wheels. There's a lap belt for older kids (like my 3 1/2 year old), and a three-point harness for younger kids (like my 14-month old) - these mechanisms probably aren't compliant with US safety standards, but I don't have any problem with them.

How much can you carry?

The other day, I popped into The Bike Stop on the bike path in Arlington and created a bit of sensation - and one one of the staff asked me to take his sister and her friend for a ride. Why not? When they emerged from the shop, it turned out that they were 7 and 9, and a little chubby... but we still had a nice ride and the bike handled perfectly well. The maximum weight recommended by Christiania is 100kg, or about 220lbs. I've carried all sorts of stuff, including children, dogs, groceries, rubbish, and a big portable PA system.

Is it hard to ride?

Not at all - once you get the hang of it. I would recommend some practice before taking on passengers. It can be tricky going round corners at speed, just because you have to lean into the corner to avoid flipping over (I've never flipped, but I've come close!)

What else can you do with a Christiania trike?

They aren't only good for schlepping kids around town, though they are great for that. Since they're all built to the customer's specifications, they can do lots of things, including carrying up to six kids, I think.

In London (and elsewhere), they're used in their purest form as courier and delivery bikes. The big box and 100kg capacity is definitely a couple steps above what your average courier on a fixed-gear bike can do!

This would also be the ideal vehicle (even in Boston with the harsh winters) as an alternative to a car. For journeys of six or seven miles, it's perfectly comfortable with any sort of load; I loved doing all the shopping in London with ours. And aside from the practical appeal, it makes a great statement!

Where can I get one?

If you're in Denmark, you'll have no problem, since you already see them everywhere. We bought ours in London, from the wonderful shop Velorution. They're very helpful, and they have all sorts of Euro utility bikes and elements of bike culture. If you're in the US, you're pretty much out of luck right now. Christiania does not export to the US, so the only way to get one over here is to buy in Europe and bring back as we did.