Playing Sound of Music with just one trombone

I'm now doing my second run of the sound of music as a single trombone in the orchestra. It is scored for two, plus the tuba.
I suspect that, more often than not, orchestras will do it this way. The second bone part and to the tuba part aren't exactly superfluous, but it is reasonably easy to cover all the best bits with one instrument. (As long as the instrument is a large bore symphonic horn, that is. Also presuming that there is someone playing the trumpet book. There are several spots with unison trumpet and first trombone, and I've tried to avoid those, opting for harmony parts instead.)
There really isn't much of any interest in the tuba book, but here are the numbers where I've been playing second instead of first.
6. My favorite things - m167 to the end
21. The grand waltz
24. So long, farewell - play cues at m93
28. Climb every mountain - m28 to the end
29. Entr'acte
32. Reprise: my favorite things
37a. Processional
37b. Canticle (if nothing else 37a and 37b are crucial - and fun to play)
46. Finale ultimo
47. Bows - m53 to the end
Posted by Andrew at 12:37 PM No comments:

For Elsa's second go at Gretl (Footlight Club this time), I made up a little notebook for her to keep track of the notes given by the choreographer, director, and music director after each rehearsal.
I had a page for every number and act that she was in. I started with some notes that I already had for her, and some from the directors. Then, after each rehearsal, we took any additional notes and wrote them in by hand.
Then, we reviewed them before each subsequent rehearsal and performance! Organizing the notes this way made it much easier to review scene by scene and number by number, and it made a big difference! 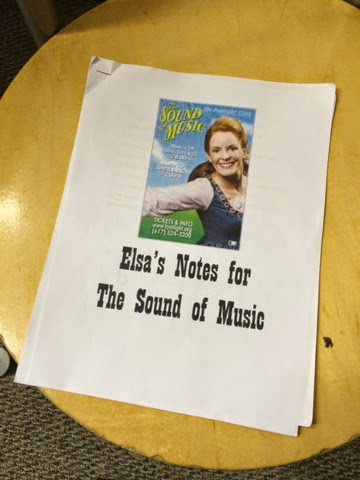