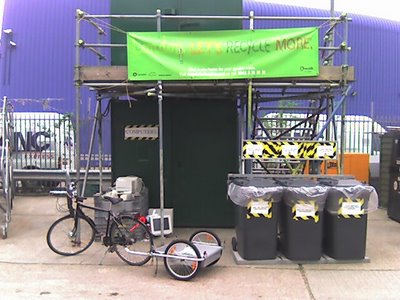 Today I hauled my old PowerMac 8600 200 and Sony monitor off to the Regis Rd recycling centre and left it there to be disposed of. Also finally got rid of the 100 or so AA and AAA batteries we've been saving since Fresh & Wild stopped accepting them (Must be the Whole Foods influence again....)

In any case, it was a triumph for the me and the trailer, which I finally retrieved from the storage space this week. It was a heavy load, but I tied it down well and took it slow - and no problems at all! I was trying hard not to tip over on a busy road like I did not too long ago with our old TV, and my efforts paid off.

I always find a trip to the recycling centre to be a buoying experience, and today was no different. After leaving the computer, batteries, plastic bags, and oatmeal tins (which had once held the batteries) in their respective recepticles, I asked someone for a couple curbside containers, and he found two and deposited them happily in the trailer.

The really nice discovery is that two of those containers fit perfectly in the trailer, and we packed them both with shopping after Gem's music class! 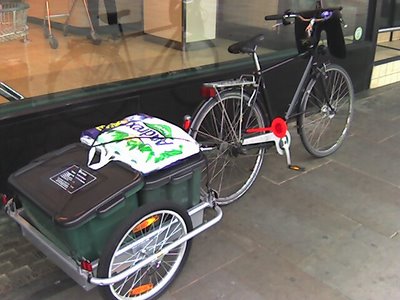 This photo also shows the nice reflective lolly pop I've installed in the hopes of keeping cars (and bikes!) from coming to close when I've got Gem.
Posted by Andrew at 4:33 PM No comments:

To finance my Thorn, I sold the Bianchi Trofeo I bought back in 1986. I'd grown tired of its constant problems and didn't have the gumption or money to replace the wheels and do the other stuff it would have needed to keep it roadworthy.

Looking back now, though, it would have made a superb fixed-gear bike (which is how I billed on ebay, actually, but I just didn't think I'd want one myself), or the frame would have been the great basis for a nice upright.

As a memorial to old Celeste, I've posted the photos I used on eBay on Flickr . Just look at those lovely lugs!

I hope you're enjoying your new home in Hull, Celeste!
Posted by Andrew at 11:23 AM No comments:

The weather was much more cooperative for our ride to the nursery this morning - bright and sunny, but a little cold.

Thankfully uneventful ride, but still a few things worth mentioning.

Maybe it's the improving weather, but I noticed lots more families cycling to school today. I spotted most of them, strangely, right on our corner! Mostly one parent cycling along with a youngster - on the sidewalk! Very annoying, particularly considering the congestion on our sidewalks. I really wanted to say something to them, but the usual bad behaviour of the drivers along that road made me bite my tongue. It's fine in theory to suggest that children of 7 or 8 be required to ride in the street and obey the law, but how can you know that a child will react with the same reflexes and judgment as an adult? Difficult one.

There was also one parent with a kid on a tag-along bike in tow riding in the street, and another one on his own bike on the sidewalk. This seems the worst solution of all because the parent's attention is divided between the road and the kid on the pavement - and the pavement rider will have to resort to some dangerous tricks to keep up.

Then, after we crossed over the roundabout, there was the usual congestion at the top (or bottom?) end of Loudoun Road next to South Hampstead station. A cyclist behind us was riding quite responsibly, taking his rightful space in the road, but incurring the wrath of a black Mercedes, who then proceeded to roar ahead of both of us and intentionally block our way. He roared off again as we cyclists turned up Boundary Road. During the moment we were stuck behind the Merc, Gem looked back at me and said "Too many cars!" I shared this with the other cyclist as we all waited to cross the Finchley Road. He was a friendly Aussie on a beautiful black Thorn XTC.

Finally, on my way home, I came across a welcome sight in Regents Park. Two community support officers were stopping cyclists who were riding across the footbridge into the park. Cyclists who do this make me angrier than I can say: they endanger pedestrians and sour the general public on all cyclists. One miscreant was having a citation written for him as I went by! That'll learn him!
Posted by Andrew at 4:01 AM No comments:

Just approaching 0900, and the sun is shining. An hour ago when I biked Gemma to nursery, it was a different story - light rain and dark skies. But that's English weather for you, I guess.

But for some reason, what is usually a relaxed and uneventful 20-minute ride today was one close call after another (all really just petty annoyances, but probably enough to rattle a less confident rider with or without a little passenger). The 4x4 Porsche overtaking and blocking the access lane to the ASL on Boundary Rd was a small thing. But the cyclist who rocketed past leaving no room for error between us and the queue of cars as we aproached Regents Park might easily have turned bad for any of us. (Carradice saddle bags & 1970s gym shorts and bike of similar vintage - sound familiar to anyone?)

Then there was the HGV on th Outer Circle that came too close and sprayed us with filthy water... And a few other incidents like these.

Sure, nothing that we as cycle commuters don't see every day in London. But today, it just seems that there was more of it than usual.

Which leads me to my question: Anyone notice this today, or is it just me? Is it because of the weather, or because it's Monday - or a combination? Or maybe I'm just hyper-aware on potentially treacherous days... 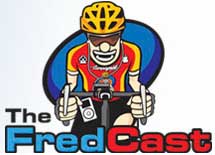 Not having an iPod, I've been a little behind on PodCasting and such things. But I've been listening to a couple good shows I subscribe to from NPR (technology and pop culture) recently, and today I decided to branch out. Since I'd already gone through my NPR PodCasts, I had a look for some bikey ones and came across The FredCast, and it's really good! It's done by a super-keen Californian cycling enthusiast every week or so. It's very well-produced, and David (there's no one named Fred, that's a term that racers use to refer to bad riders who spend too much on their stuff) is a great host.

It's a bit too focused on pro cycling, but still really interesting. There's a good companion website too at http://www.thefredcast.com. Makes me want an iPod even more now, but I can't bear to get one until a new model comes out.


UpdateI had a comment on this entry (which I've opted not to post because it's anonymous) indicating that Fred is a real person and that I made other errors in my piffle of a post. I'm pretty sure I got it right... here's what the FredCast website says:

The FredCast is produced by me, David Bernstein. I am an avid road cyclist, and I live in Southern California with my lovely wife, Donna, and our two daughters, Meghan and Emily. I am a former bicycle industry executive now working in my family’s industrial machinery manufacturing company. I attend frequent industry functions and I am (proudly) one of the few people in the room who doesn’t play golf.

Posted by Andrew at 1:14 PM No comments: 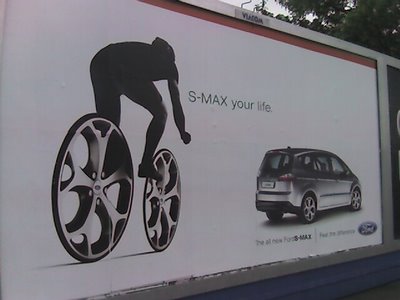 For once, a bike (of sorts) is being used to make a car look sexy!
Posted by Andrew at 9:01 AM No comments:

My Fahrrad Manufaktur T100 is finally firing on seven gears again! A welcome development after almost a year of failed attempts to restore gears 1 & 2 to working order.

Andrea, the mechanic at Velorution, ended up replacing the shifter box and the twist shifter itself, now everthing works pretty much as it should (still the odd skip or stick, but no big deal).

The odd thing is that he said he'd onlly seen this type of failure in a SRAM hub in thier heavy-duty work bikes.

The new shifter has quite a different feel to it, but it's growing on me. But the really neat thing is that the direction of twisting is different, which makes it the same as my Rohloff - much less confusing in the long run!

Posted by Andrew at 2:16 AM No comments: 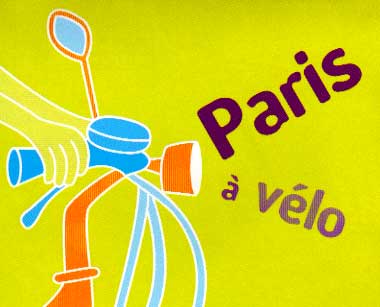 I had some time off in Paris last week. It was a nice afternoon, and I sought out a place to rent a bike. I was hoping to find a place near my hotel just off the Champs Elysees, but the closest place the concierge could find was at Les Halles, so that was still a good excuse to walk over there and have a jambon buerre along the way.

When I found the place without too much trouble and got a bike. It was a bit of a disappointment straight away - seat askew, brakes scarcely working. But functional enough, and I'm sure Henry Miller rode worse. 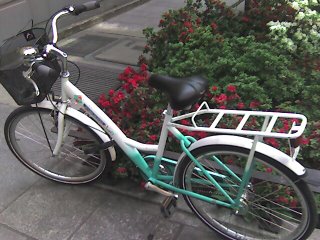 I set off towards Le Marais, and soon found Paris to be one of the least hospitable biking cities I've experienced. The Paris à Vélo map indicated lots of of routes, but even the primary routes were shared with buses. What you don't realize as a tourist on foot, though, is how heavy the traffic is on small streets, which all seem to be one-way in the opposite direction you want to go. And whenever I wanted to stop and pop in somewhere, I couldn't find a place to lock up. There are some racks here and there, but no parking meters or any other accessible fixtures. 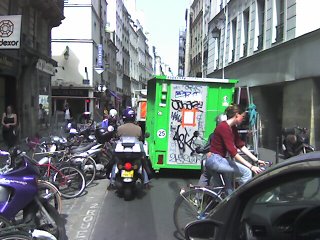 I had a nice ride by the end of it all, with a lovely ride around the islands and a bit of ice cream.
Posted by Andrew at 1:03 AM No comments:

I was cycling home through Regents Park (clockwise around the Outer Circle, that is), and I stopped a red light .

Coming the opposite way, another biker stopped as well, and a p
big police van pulled up behind him. This guy waited a bit, then took off through the red when the green men appeared.

Then to everyone's surprise, on came the flashing lights! Nicked! I kept going (despite the temptation to take pictures!). I suspect he was just told off, but he certainly set a example for all the bikers who passed by after! 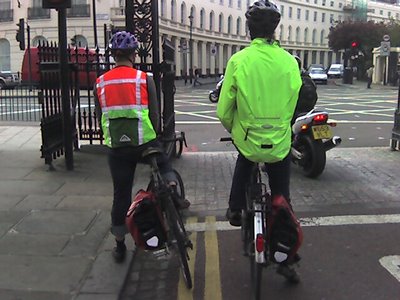 A nice bikey couple heading into town from Regents Park with their shared set of Ortlieb panniers! Looks like springtime has finally arrived too! (Incidentaly, the tall one is the girl!)
Posted by Andrew at 3:53 AM No comments: