Visit to the Dutch Bicycle Co in Somerville 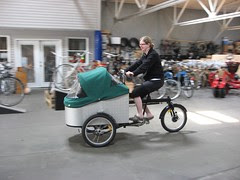 Sorte Jernhest Carrier Bike
Originally uploaded by ahconway
Yesterday, we finally visited the Dutch Bicycle Company in East Somerville. It's a bit out-of-the-way, so it took me a while to finally make it there.

It's housed in a big space that's shared with a used car dealer of some sort, which is ironic to be sure, but it does provide lots of great indoor space for test rides.

I was most looking forward to test riding the Sorte Jernhest Carrier Bike, a cargo/passenger trike that's roughly comparable to our Cristiania. The proprietor insisted that we all give it a try, all four of us got to check it out in detail...

Having three wheels and a box in the front is where the similarities between this trike and ours is where similarities end. Our box is made of plywood, this one seems to be aluminum. This one has smaller wheels. And most interestingly, this one steers with the rear wheel alone, while ours pivots the whole front box.

It appears to be much lighter than the Cristiania thanks to the materials used, but I don't know how the lighter materials would translate into durability. I'm absolutely confident that our trike will still be on the road when our girls have kids of their own, but it's impossible to know about this one.

It's very comfortable to ride, and the passenger compartment is also very accommodating - though there are some poky-outy bits on the inside of the box that could be scratchy. The roof is very nicely made, but lateral visibility is limited, and there seems to be less space inside overall than we have.

But any differences mean very little in practical terms, because it's the only human-powered vehicle of this sort that's really available in this area. Sorger imports them directly, and he's got full liability insurance for everything he sells. (Cristiania won't import to the US, and anyone who tries to do that independently is taking a big liability risk.)

So, based on my limited experience with this trike and the shop, I'd absolutely recommend it for anyone who wants carry kids and/or cargo around town in comfort and style.

The shop also carries lots of other exciting stuff, including super-stylish Sogreni bikes, a big selection of Gazelle products, and Conference Bikes. Not to mention a GIANT spaceship, which Sorger claims is a boat that he's storing for a friend.

We also test-rode the Gazelle Cabby, which is a more refined version of the Bakfiets cargo bike. The original Bakfiets has a plywood box in the middle and steers via a front wheel out front. The arrangement of this version is similar, but it's lighter, and the cargo/passenger compartment is heavy fabric around a sturdy frame, which folds when not in use. (A little web surfing reveals that the Gazelle doesn't have a rain cover, though, which is a big problem if you're going to rely on this for regular transport! There's a comprehensive review here.)

Great to see all this stuff being made available in the US! According to Sorger, his sales are going great - so I hope to see some of these beautiful bikes out on the Minuteman Bikeway soon.
Posted by Andrew at 9:25 AM 3 comments:

Look who's on a Trail-a-bike! 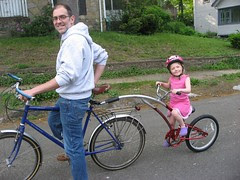 Look who's on a Trail-a-bike!
Originally uploaded by ahconway
I finally set up the Trail-a-bike I bought second-hand for Gemma yesterday. What a triumph! She caught on straight away and was pedaling like a fiend. It was a bit fiddly to attach to my slightly-oversized seat post, but I got it on there in the end.

I also got Elsie's free-on-curb bike seat set up on Kim's new bike, and she was equally thrilled. We had a nice family ride around the neighborhood to celebrate.
Posted by Andrew at 8:58 AM No comments:

Hooray! Bike week! We (Ciclismo) are doing a bunch of events... Lauren led a nice ride on Monday, and today (Wednesday), we're hosting a bike breakfast at the office. Lauren made it downtown for the kickoff on Monday and even met the mayor there. I had a nice surprise on my way to Cambridge for a meeting yesterday when I came across this bike breakfast at the Alewife end of the bike path. Forgive me if I was more interested in the utility bikes than the coffee and scones!

Posted by Andrew at 5:32 AM No comments: 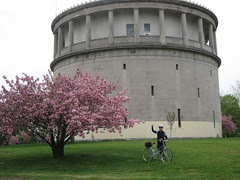 You did it, Kim!
Originally uploaded by ahconway
With the girls happily settled in with a fave babysitter, Kim and I were free to ride for the morning - her first jaunt out of Arlington on her new Rivendell Betty Foy.

We did one of my usual loops up through Lexington, Bedford, Concord, and Carlisle, with an ice cream break at Great Brook Farm. Kim was a super trooper, managing the 34-mile distance with no trouble at all!

The Minuteman path was, of course, a highlight of the ride, as was the ice cream! The bike fared well also - Kim described it as "awesome!"

Only 466 more miles until her saddle is broken in!
Posted by Andrew at 9:34 PM No comments:

Applying the finishing touches to Betty 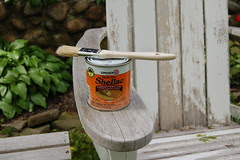 Amber shellac & brush
Originally uploaded by ahconway
Yesterday, I applied three coats of amber shellac to Kim's cork grips. This sort of thing is a real hallmark of Rivendell geekery, but I have to admit that the finish and color really look nice!

It was pretty easy to do too. My stroke of genius was inspired by my dentist, who likes to drill a tooth that's poking through a sheet of latex... I put a black trash bag over the front of the bike and made holes for the grips.
Posted by Andrew at 9:28 PM No comments: