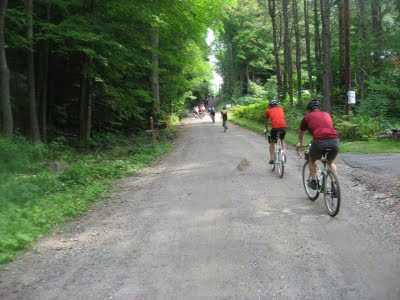 I tell people all the time that my favorite ride ever is the Deerfield Dirt Road Randonnee, an epic mostly off-road super-hilly ride in western Massachusetts. The first year I did the ride (2008), I produced a little YouTube video (from which Google has unfortunately seen fit to remove the soundtrack). I did it again in 2009. Both times, I opted for the 100k version, both because I figured that a metric century would be challenging enough with the hills and terrain, and also because the long 180k version really demanded an overnight stay the night before. Each time I did that ride, I really enjoyed the challenge of the route, the gorgeous scenery, and the diverse, quirky, congenial group of riders.

Last year I preregistered but had to miss it because of a family vacation conflict.

So this year, I started planning early and rather ambitiously registered for the new 115k route. Only 15% more distance than the shorter route - but it seemed twice as difficult! It was all about the climbing: this ride had over 9000 feet of climbing, including lots of long dirt-road climbs of over 15% grade and some in excess of 20%! Geez.

I drove out early with my friends John and Sam, and it was sure nice to have the company. I've been talking up the ride for ages, and the messages the organizers send out beforehand gave them a nice set of nerves heading into the ride. As the veteran, I was calm and just looking forward to a good ride. Which is probably just as well, since I probably wouldn't have had the cojones to attempt it if I'd had an accurate idea of what it was going to be like!

The organizers state that, while the big climbs on the 100k ride are mostly before lunch, on the 115k, they're after. I had a really tough time in the morning, which actually made me consider taking advantage of a bail-out point at the lunch stop....

The ride started off fine, with a nice, quick 15 miles leading to the first rest stop. It would be 25 more miles to the lunch stop, which turned out to be among the most miserable miles I've ever ridden. We started off just fine, with a couple really steep, rough tracks to climb. (On one of these, I was stymied by a volunteer who saw fit to put her hands on my bottom and try to push me through the rough spot while suggesting that I "steer! steer! steer!" - but she ended up pushing me off the course entirely.) I generally love that sort of climbing, but it wasn't long before I started feeling sick. Really sick, like with an upset stomach, swimming head, and all that. My stomach had been a little queasy for a while, and I certainly didn't help matters by overeating the morning of the event. This is often my downfall - I'm so afraid of bonking that I eat too much and end up feeling sick.

This feeling persisted and was at its worst at about mile 30, heading into a long, steep climb. I felt pretty bad during the whole thing, primarily with an upset stomach. It was a seemingly interminable ride up a twisty dirt road, and there was always more climbing around every corner. I seem to remember shouting to someone up ahead at one point "any end in sight?" as he rounded a bend. Several people had started walking their bikes by now. I didn't resort to that, at least, but I did take breaks from pedaling quite often.

It was at this point that I started thinking about ditching the ride. But what would I tell my buddies? Surely they'd try to dissuade me, and I was in no mood for that. What would I tell my girls when I returned home? And how could I let this the ride I've been looking forward to for months end in failure? So I figured that I'd reassess my fitness after lunch and then make a call.

And I was glad I did. I didn't have much for lunch, which did help my tummy start to sort itself out. I had a little pasta, a big dill pickle, some fig newtons, and a banana. (In retrospect, it sounds like a pretty gross combo, but it worked for me!)

After lunch, we headed into the most challenging riding of the day for sure. 20 miles and more than 3500 feet of climbs! The pithy description on the cue sheet describes this stage as "a hard dirt road climb, a very hard dirto climb, then a super-hard dirt climb!" Ah, the beauty of understatement. I remember thinking on each of the first two climbs "Geez, it can be worse than this one?" But I just slogged it out, spotting a landmark up ahead, pedaling to it, and taking a break. Then doing it again. And again. Some climbs were in excess of 15%, and the steepest topped 20%.

This was definitely a ride of superlatives. Sure, it had some of the difficult terrain I've ever tackled, and the pain I felt in the morning was my worst ever. But smack in the middle of this stage was also the best downhill I've ever ridden. Ever. A long, smoothly-paved twisty-turny rollercoaster of a ride, allowing just enough visibility up ahead to let me top out at 46mph. There were also some 20%-plus bits on this section that made me feel almost weightless. Unparalleled, unforgettable.

The last climb brought us to the rest stop at the Little Big House Gallery, where the volunteers were great about cheering on incoming riders. With only 12 miles and 1100 feet of climbing to go, this stop was a big relief to all, I think. I believe it was about 3:30 at this point, so we'd been riding for seven hours - and feeling it.

The weather had been lovely all day, starting with fog and temps in the mid-60's, and occasionally getting very bright and sunny. The combination of hard riding up, fast riding down, riding between heavily wooded lanes and open fields made me glad I was wearing a wool jersey with a full zip, and I stayed comfortable in that respect all day. At this last rest stop, though, the sky had started to darken and it was clear that the weather associated with Hurricane Irene was headed our way.

And it caught up to us during the last stage. It started to mist heavily at first, and by the time the end was well and truly in sight, there real drops coming down. This wouldn't have bothered me in itself, but it was an indication that I needed to get home before the real weather hit Arlington.

Just when I was in the home stretch and the weather was getting wet, it became clear that I'd missed a turn somewhere.... I met up with someone who'd done the 100k ride and got back on track after that, but I ended up going a few miles out of my way. I'd lost track of John and Sam, but found them waiting for me a few miles from the finish. We rolled in together and celebrated a good ride as we loaded up the car, then skipped the ending festivities to get home to our families as the weather roiled. We spent the 2-hour drive home recounting the climbs, the descents, the food, and the personalities of the day. And in my own head, I was celebrating a big personal accomplishment and the fact that I stuck with it to the end.

My trusty Thorn Tour didn't let me down yesterday by any means... but I'm thinking that this route in particular would be a lot easier with a cross bike. Thorny weighs in at about 35lbs, after all, almost twice what you'd expect from a nice cross bike. The Thorn is perfectly happy cruising along on dirt roads. But it on the steep climbs that I'd like to get out of the saddle a bit more, and the weight and geometry of my bike really just don't encourage that. (Incidentally, I was excited to see another Thorn on the route yesterday, but I never managed to meet its owner!)

I'm a bit sore and definitely fatigued today, which is perfectly fine since Hurricane Irene has us sequestered inside all day. I'm already looking forward to next year!