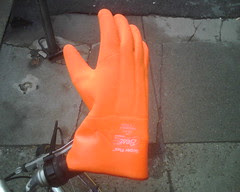 Super Flex Best fisherman's glove
Originally uploaded by ahconway
It's miserable getting your nice warm gloves soaked through on your commute to work and having to ride home with cold gloves, still soaking.

Various bike store sales people have told me that "there's no such thing as waterproof". Fine. But could that really be true?

I couldn't imagine this to really be the case. So I asked one of my trusty email lists (internet-BOB) and got a range of replies from all over the world.

One kind soul who lives nearby emailed me off-list to say that he has a pair of completely waterproof fisherman's gloves that he'd sell me cheap. So we met in Davis Square this morning and did the deal. Had a very nice chat, too! Very likeable fellow.

The gloves (as this photo clearly shows) are utterly and completely waterproof, but perhaps not suited to stuffing cotton into little bottles and the like.

It was a great start to the day (which also happens to be a gorgeous 58 degrees!), after which I found a nice reflective trouser band in the street!
Posted by Andrew at 9:06 AM No comments: 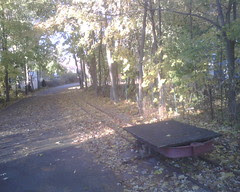 Not many people on either path, so it was really lovely. Lots of leaves, and I took care not to go slip-sliding away, but I never really lost my footing at any point.

The real surprise was the second path, which picks up very near the Bedford end of the Minuteman path, across Loomis Street. It even has a bit of the old track at the start. The surface starts fully paved, then it turns to packed gravel, much like many of the Sustrans routes in the UK. Again, lots of leaves, but the surface was generally very good, allowing me to truck along at 17mph for most of its length.

I turned around at Fawn Lake (which warrants further exploration another time), which turned out to be precisely 10 miles from home.

Old Thorny performed exceptionally as usual, reminding me that it really is worthy of the odd off-road adventure.
Posted by Andrew at 8:15 AM No comments:

About 35 miles ago, my cyclometer ticked over 1000 miles! Doesn't qualify me for Paris-Brest-Paris, but still, it's probably a record for me for I don't know how long. As it gets colder, I wonder how I'll stay in shape.
Posted by Andrew at 8:29 AM No comments:

It's a rainy day in Balamory

And Boston too. I briefly considered taking public transport in today, but changed my mind because it's supposed to be really nice later today, and I didn't want to get stuck on the T with viruses running rampant (everyone I know seems to be deathly ill right now).

I bundled up a little excessively, going with fleecy mid-layers instead of wool, because synthetics should dry out quicker. It was a light but steady rain all the way here, and I do think my Gore Tex outer layers let some water through. According to my queries at local bike shops and in email groups, the thing to do is to wash and dry all of it, which should rejuvinate everything. There's also a product called Nikwax, which lots of people like. I'll give it a go without first.

I took the scenic route today (bike path from Arlington to Cambridge via Alewife, then along the river), and made a big discovery on the top end. To get from Pleasant Street in Arlington to the bike path, I'd always gone all the way down to Mass Ave and then cut in at what used to be Carberry's bakery. But today it occurred to me to turn off Pleasant Street and follow signs to the Boys & Girl's club, then ride along the path by Spy Pond and join the bike path a little later. That's a much, much better route, allowing me to avoid the whole right turn on arrow only nonsense of that intersection and also cut out a goodly part of (un)Pleasant Street!

This was also a nice test today for my Ortlieb trunk box - it kept my change of clothes bone dry!
Posted by Andrew at 9:31 AM No comments:

Early November, and it's well and truly Autumn in Boston. Many of our trees are still green, others are completely naked, but most are a bit colorful and somewhere in between. The weather is finally perfectly chilly and clear by and large, with 30s in the morning and 40s-50s later on.
Perfect weather for biking, in other words! My birthday wool jersey is now a staple, and I can wear it almost everyday without getting all stinky (of course, I air it out at the office during the day and also overnight at home).  It's from Earth Wind & Rider. I also have a nice wool beanie from Kucharik, and I have some wool tights from them on the way.
Of course, the time change last week means that I'm riding in the dark a lot more, but it's not a big deal, really. I tend to keep to Mass Ave on the way home if it's really dark... for some reason I feel like that's going to be safer than heading up Broadway via Davis Square because there's MORE traffic and cars are necessarily slower. More bikers too.
The nice thing is that, while I haven't really managed much weekend riding because there's just so much fun stuff to do with the family, I've been averaging three to four days of commuting by bike each week, putting my weekly mileage between 60 and 75 - not bad!
I've also been thinking about how I'll keep in shape when the snow starts falling... should I try snow-shoeing or XC skiing? Jury's still out. Those would still be weekend pursuits, though, but I'm going to try walking to Alewife for my commute, which is about 3 miles each way, I think. And that should be much easier now that the bike path will be plowed, at least part of the time!
Posted by Andrew at 9:08 AM No comments: