I picked up Thorny from Harris Cyclery yesterday after a tune-up and hub oil change (I know, I should be doing all this myself, but who's got the time?). So today, I got up at an ungodly hour and did 50 miles before breakfast (left around 6, returned around 9:30).
It was a beautiful route, courtesy Rubel's Pocket Maps once again. The route picked up at the Bedford end of the Minuteman path and took me through Lexington, Carlisle, Bedford, Acton, Concord, etc. The destination of sorts was Nagog Pond, a public water supply lake in Acton with no public access. Very pretty, though.
But man it was cold! It was dark and about 22 degrees when I left the house, and it only eeked up to about 33 by the time I arrived back home. Because it was pitch black until around 6:30, I opted to avoid the bike path until Lexington. And in that first half hour, both of my water bottles had already frozen up substantially - an hour later they were completely frozen! At least I was dressed warmly enough, except for my toes, which were pretty cold all morning.
Posted by Andrew at 1:18 PM 3 comments:

When I rode to work or to the train station in London, I would always use the Fahrrad - my German city bike with fenders, rack, 7 speed hub gear, dynamo-powered lights, chain guard, and upright bars. I used this bike for most utility trips, actually (as opposed to exercise or distance).

It was the perfect bike for this sort of thing. Very upright, so I could see everywhere and all could see me. It was easy to ride and very stable with or without a load. I had the child seat on that bike, and it was also very easy to take Gemma wherever.

When I first started riding it, the biggest revelation was that I felt like I was really part of the world during my journeys - I was really in touch with my surroundings, and I could stop quite easily, lock up, and investigate a shop, take a break, or whatever. I almost always dressed in normal street clothes, so I didn't have to worry about being dressed inappropriately or bringing a change of clothes.

So when I started riding to work here in Boston, I started with the Fahrrad once again. I didn't quite know how to pack proper work attire, and I was afraid my Thorn would get stolen, so I assumed that I'd just use the Fahrrad like before. I wouldn't have to change clothes, and the bike is pretty unappealling to thieves.

After my first couple tries, it was apparent that this wasn't the ideal solution. For all of its stability and smoothness on the flat, the bike really isn't designed for big hills - it's heavy, upright, and the gearing is pretty high. Which was a problem because I live on top of one of the biggest hills around. And since I wasn't in particularly good shape at that point, this was especially daunting. Also, my commute in London was usually 4 or 5 miles, and here, it's 9 or 10, depending on my route. So the ride rally tired me out, especially on returning home. This also meant that I got sweatier than expected, so I started wishing for a shower and change of clothes.

Then I started riding in on my Thorn, and that's worked really well. It's much more comfortable than the Fahrrad (owing to a better long-distance position, a more forgiving frame and more voluminous tires, I think). I've also attached a hard-shell box on top of the rear rack, which works great for bringing a change of clothes. I've also largely stopped worrying about theft, thanks to a variety of locks and judicious choice of lockup spots. But I really do feel like I need to ride in proper cycling clothes because there's grease to contend with, I do get the odd bit of water splashing up, and my Brooks saddle could potentially discolor light-colored trousers.

So when I had a meeting in Allston yesterday, I dusted off the Fahrrad and rode it in all my business finery. It worked just fine, of course, but I was really surprised at the unforgiving ride, especially over the very poor road conditions. On the way home, I managed to cruise up our hill without too much trouble, though I must admit that I did think about walking at a couple of the steeper points.

This got me thinking about whether there's a better bike for me to commute on. Maybe something a little lighter than both, with drop bars and a rack, a regular transmission (not a hub gear like both of my other bikes), and fenders. Maybe a Surley? Not too sexy, though. I saw a beautiful refurbed Vitus in black and polished aluminium at Alewife today. I'm going to keep my eyes peeled. 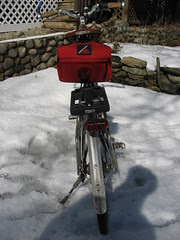 New-old saddle bag
Originally uploaded by ahconway
Very nice 26-mile ride yesterday (Sunday). Did the easy loop up to Carlisle, to Concord, and home. Lots more work than I'd expected, though, due to strong, cold headwinds for much of the ride.

As usual before a short-ish ride like this, I struggled with choosing the right bag to bring. I didn't want a pannier or even my Carradice Barley (both too big, and the Barley is a pain to attach).

So then it occurred to me that the early 80s Schwinn I found at a yard sale last hear had this Cannondale bag on it. I dug my way into the bike garage and found it - perfect! Just the right size for a cable lock, some snacks, tube & patch kit, and a little camera.

It's a nice glimpse into the early days of Cannondale, when it subsisted on bike luggage, all products had train-themed names, and the logo depcited a little train station (I believe the company was named after the Metro North station in CT that served its original HQ).
Posted by Andrew at 9:39 AM No comments:

On Charles Street this morning, was spinning along after a very pleasant ride along the Esplanade and came to a red light. It's a light that I sometimes slow and go through if there's no one around. But today, there was a motorcycle cop coming in from the right, and I was all the way to the right on Charles Street, so he was quite close.

He said to me "I'm goin right theah," indicating that he intended to park his motorbike where I was waiting. So I said "So you won't arrest me for running this light, then?"

"No way!" he said, smiling. So I cruised on through and he pulled into my spot.

It's not the first time I've been encouraged to run a light by a Boston cop, and I'm not sure how I feel about it.
Posted by Andrew at 9:06 AM 1 comment: