Kindred spirits at the zoo

No, not the residents of the monkey house! As we were on our way out, another couple cycled in with their 17-month-old perched in another Bobike seat just like ours, complete with windscreen!

I'd passed this couple with thier baby on the canal before, but that would have been a highly inconvenient time to talk. We had a quick chat this time, though. The Bobike Mini was mounted on a Dutch Filipak from a shop in the Netherlands called 't Mannetje. I had a look at the website, and there's some really interesting stuff there - lots of exotic but practical city and cargo bikes.

I told the chap at the zoo we're expecting another baby, and he recommended the t'Mannetje Filiduo for us. Interesting, but but I don't know about having TWO kids behind (let alone one), and the next one will be a bit young for that sort of thing anyway.

I wish we'd managed to exchange details, but I'm sure we'll run into them again - that bike is hard to miss! 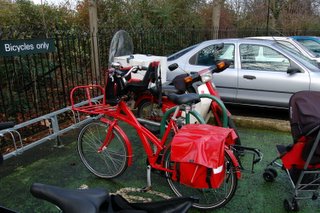