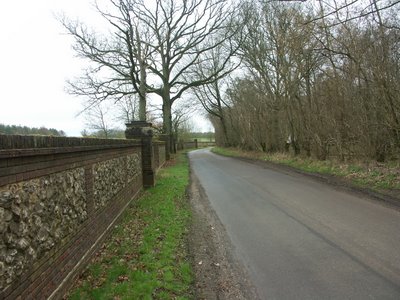 Did a lovely ride today, using a route from Nick Cotton's excellent series of English cycle routes. This one was called "From Whitchurch to Kingsclere via Hampshire lanes and Watership Down" from 24 One-day Routes in Dorset, Hampshire and Isle of Wight.

The ride started and finished in Whitchurch, which is just an hour on a fast train from Waterloo (but £18 return on a holiday? pure madness!). All the directions from the book were spot on, with a few exceptions where signs have been replaced. There were a few stints on busy A-roads, but nothing terrible, but the vast majority were on very VERY quite country lanes. Some were really lane-y, with high hedges on both sides and a gravelly hump in the middle - but there were also lots of very smooth paths that could have been mistakened for Dutch cycle paths if not for the presence of horse riders and absence of road markings.

Mostly really rural, with the odd bit of 1950s ugliness on the outskirts of bigger towns like Overton and Whitchurch. But that was more than compensated for by the giant country houses and thatched cottages! Lots of springtime animal scenes, too, with tons of ducks, horses, rabbits, cows, and lambs. I made sure to get lots of pictures of these for Gemma.

Despite the title of the ride in the book, Watership Down never made itself evident. I had a look at the map afterwards, and know exactly where it was, but it would have been nice to have known about it at the time. I'm telling myself it's where I got a good picture of the hare standing up on its hind legs...

The weather was the only downside of an otherwise perfect, lovely ride - it stayed very wet for most of the three hours or so I was riding.

I took the clunky Minolta along, and I've published a bunch of photos on my flickr photostream.
Posted by Andrew at 4:06 PM