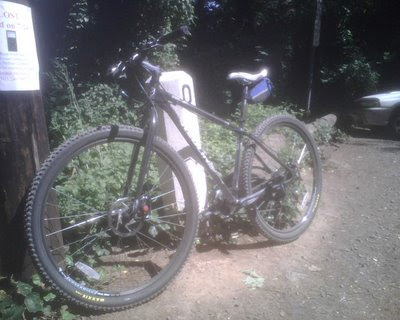 The bike I rented in Portland recently was really fun. It was a Redline d460 29er. I'd expected a standard hybrid like the one I'd rented in St. Louis, but it was a real treat to try a new sort of bike.

What's different about a 29er? A 29er is a bike with 29-inch wheels. A bit of an odd size, I'm not exactly sure when this trend started, but it's definitely growing in popularity. The guy at the bike shop said it was a little new to him, but people like 29ers because they roll easier through holes and other small obstacles, and they have a different feel from 26-inch wheels. It also seems that most 29ers have other quirky traits - the one I rented had wide knobby tires like a full-fledged mountain bike, but no suspension (standard on MTBs these days) and a single chainring in front with a seven-speed cluster in back.

Despite having only a third of the gears you'd expect on a modern MTB, I found it very easy to ride, both on road and off. The tires were pumped up for easy pedaling on the road, but they still had plenty of grip on the gravelly trail surface. There were lots of switchbacks and I was riding cautiously, but I never had any problems at all. I also found the hills to be easy to ride in the bottom two gears. Lacking any suspension made the ride a bit of a bone-shaker, but the steel frame softened that a bit.

It's great to see a quirky bike like this from a mainstream maker like Redline! This isn't even the most avant garde of their offerings, which include various single-speeds for use on-road and off.

I still consider myself a roadie, but this bike definitely made me want to invest in something a little trail-worthy!
Posted by Andrew at 7:53 AM

probably 8 or 9 in the rear, not 7, but yeah, cool bike huh? I rode one a while back and will be gettign myself one soon. Oh, and it is most certainly a full fledged MTB - suspension is for pussies.