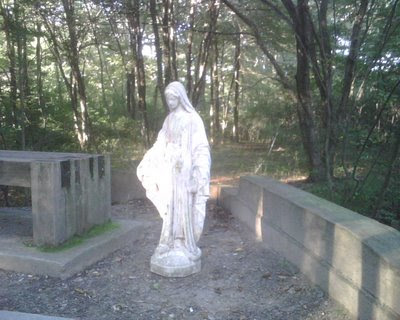 I was up early today so I did an extra ride to the end of the Minuteman Trail before my usual scenic route to work. Amounted to about 25 miles in full - not bad before 9:00! It was a bit chilly today, around 55 in Arlington when I left. The bike path was blissful, though. Lots of riders and runners out early.

It also occurred to me to take a photo of the Virgin Mary, who appeared on the path not too long ago, near the Bedford end. Lauren says she's moved a couple times, but she's still where she was when I first noticed her.

And incidentally, I had my bike serviced yesterday at Broadway Bicycle School and it was riding noticeably better today! (Unfortunately, though, it looks like I need a new cog in the back, which they've ordered for me.)
Posted by Andrew at 9:24 AM