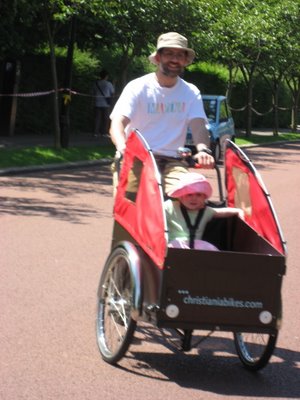 What fun! A gorgeous day, too. Nana, Papa, Kim, Gemma, and I walked down around noon had had a lovely day. The weather was perfect and sunny, and the park was packed. Not too packed, though.

We started by visiting the bikey bit, which consisted of a Camden Cycling Campaign stand (my first time in four years not working!), a cycle training thing, and a try-out area with recumbents and folders from Bikefix and a Christiania from Velorution.

Gem and I had great fun riding around on the Christiania, and Andrea kindly adjusted his son's Like-a-Bike for Gem to ride (she's so keen now!). Papa also tried out a nice folder and had a good time at that. There was a gigantic turnout for Doctor Bike, with a long queue.

We had nice sausages for lunch, then spent the rest of the day walking around and listening to music. Gem loves the blues, and the harmonica especially!

Gem and I also met Jan and her lovely Harry Hall racer, lovingly assembled by her cycle-mad dad in Manchester. While I would like to have seen some swept-back handlebars and a nice Brooks saddle on it, the five-speed Campagnolo Record drivetrain and touring pedals were gorgeous and fit with the lugged Harry Hall frame perfectly! All in all, a beautiful package. I told Jan and her companion Darren that I'd post a picture of it, so maybe I'll have an email from one of them? 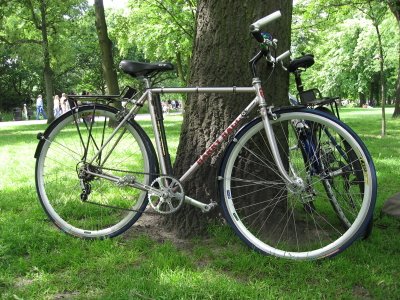 Lots more photos on flickr!
Posted by Andrew at 5:56 AM