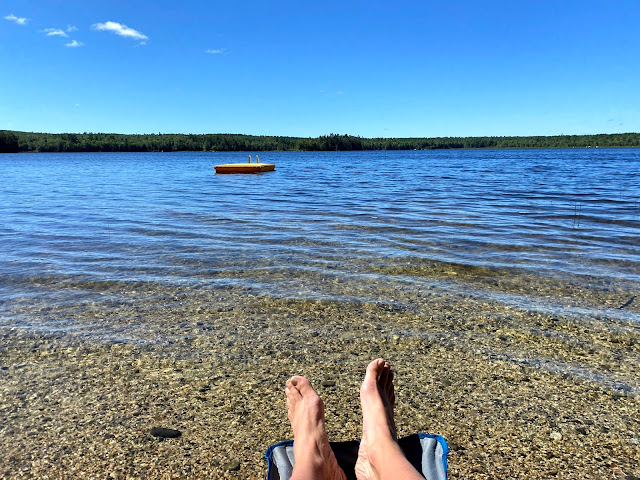 Patton Pond. I am down by the water and it's a beautiful day. It's Thursday, but this is the first time I've been down here this week. I had planned to go to Acadia every day… But that plan was scuppered the moment I felt my back go out loading bikes onto the car when leaving the campsite in Wiscasset.

Major bummer, trying to make the best of it. This is actually the first day I feel more or less human health wise. Kim and I got up at the ungodly hour of 3:45 AM and drove to the top of Cadillac Mountain to see the sunrise this morning.

We often joke whenever we are on our way somewhere that all the cars we see around us are probably going to the same place… And this morning that turned out to be true. We couldn't quite figure out who all the other cars were on route three at 4 AM, and it turned out that a great many of them were indeed on their way to the top of the mountain as we were.

We arrived at 5 AM and our steady stream of traffic more or less came to a halt about a quarter of a mile from the summit. Everyone just pulled off to the right, turned off their cars, and walked the rest of the way. I wasn't about to do that, as my back is a serious liability at this point. Instead, we just drove all the way up very slowly and double parked behind some extreme early arrivers. We sat on a wall along with literally hundreds and hundreds of other sleepy sunrise enthusiasts and waited for the sun to come up.

Miracle of miracles, just before the sun made its appearance, I saw someone backing out of their parking spot right next to where we were squatting, I zipped right in and we were set!

We stayed probably another 20 minutes or so and joined in with the rest of the sleepy, chilly crowd in applauding when the sun peeked over the horizon. We were also among the first to get back in our car for the dissent, and I am glad we were. There were cars parked on both sides of the road, leaving only enough room for a single lane of traffic going down. We got out of there relatively easily, but I'm sure it was a real nightmare for many of those who followed.

We then took a circuitous route to bar Harbor, stopping at a few points along the way for more views on this beautiful clear morning. We ended up at Two Cat Café and ordered breakfast to go, which we ate in the park overlooking the harbor. Gorgeous!

So, while my back is feeling much better today, this morning's excursion is probably the most ambitious I will be this week. So no hiking, no biking unfortunately. But this morning's adventure is enough.