The fox and the rainbow

So after Gem's nap on Saturday, we set out for a ride to Kenwood via Hampstead Heath. On our walk last weekend, it occured to me how nice that might be, so this was our chance to give it a try.

The only trouble was that clouds seemed to be moving in all day long... but if we scheduled our lives around the whims of the British weather, we'd never go anywhere. So we set off around three, and by the time we'd reached the top of the hill in Hampstead, the skies opened up and we had to seek shelter under a tree for about 20 minutes. Fortunately, though, I'd worn my new waterproof, and I'd packed Gem's rain poncho, which she wears happily. 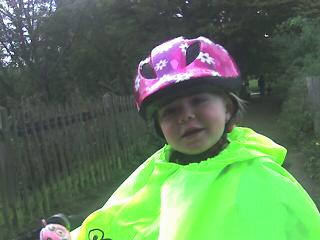 The rain finally cleared and we had a very nice ride across the Heath (mostly on official bike paths, though we got a little lost when it started raining again and I stopped paying attention). We had a lot of fun spottiing the squirrels and dogs. Then when we were humping up a steep hill in Fitzroy Park, we saw a fox! It trotted along in front of us for a while, as Gem pointed and shouted "fox! fox!" I suspect that she knows foxes from the Gruffalo, but she might have picked it up anywhere. Very exciting.

By the time we got to Kenwood, the rain had stopped, and the sun was out, which meant that the revelers from a wedding reception had spilled out onto the lawn, and many of them admired Gem, who was concerned with picking up good rocks to put in her pockets. 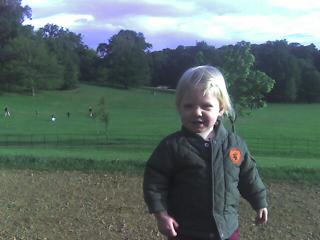 We went down to the bottom of the lawn and had a nice picnic before heading back. 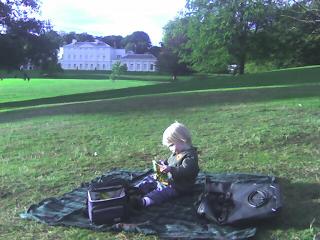 It rained a little bit on our ride home, but it soon cleared up and a giant rainbow appeared! We noticed clumps of people in Hampstead folding up their umbrellas and pointing at the sky behind us, so we stopped and there it was. Gemma's first one.
Posted by Andrew at 5:57 AM

Interesting blog you have here, I landed here on accident. I was searcing for something else and came across your site. I found it pretty interesting and entertaining. I got you book marked.

I will pop back in from time to time to see what you have new here.