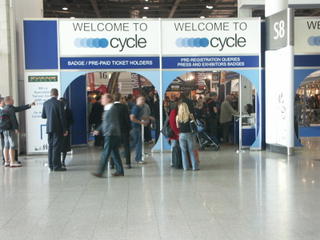 The big London Cycle Show is on now. It's always pretty exciting, and this must be my fourth year in a row. For the first time, it was held in the Docklands at the Excel Centre instead of at the good old Business Design Centre in Islington. Not a bad venue, but I preferred the old one - much easier to get to, and the mezzanine level created lots of nice space for smaller traders (many of whom where notably absent this year). The real shame is that because I didn't have a lot of time today, I had to go on public transport instead of cycle there!

I did get there in good time, though, and was one of the first in line. (After negotiating the throngs of dermatologists and hangers-on at the acne conference next door, that is.) The big difference compared to last year was that it was one continuous space, allowing the try-out track to be in the middle instead of in the car park downstairs. That was nice, and they did a good job kitting it out with London props. Lots of good bikes to try, too, but the track seemed overrun with 14-year-olds practising their bunny hops.

There was the usual assortment of lighter and shinier racing bikes and mountain bikes, none of which grabbed much of my attention. There was a distinct lack of smaller stands, though, with a just a couple exceptions. Very little dedicated to touring, kids, or utility cycling, though, which was disappointing but not surprising.

There were a couple highlights, though. The first one was at the always exciting Thorn/SJS Cycles stand, where I spied a step-through Raven Tour, essentially a ladies' version of my own bike! It's a design I haven't seen before, and it was launched at the show. Sure, not a big head-turner, but it might be just what Kim needs! The one on display had a Klikfix wicker basket and a Blackburn rack. They also had a crazy superlight Rolhoff-equipped bike that's certainly out of my price range, but nice to see anyway. Nice time talking to the guys on the stand, of course. 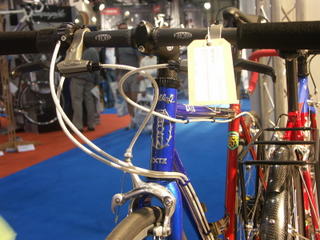 I also had a nice time learning about all the new Like-a-Bikes and all the fun bits you can buy for them now. Saddle bags, baskets, trailers, and a whole new range. I can't wait for Gem to have one! They're good from about 2 years old, so that'll be perfect for her birthday in December. 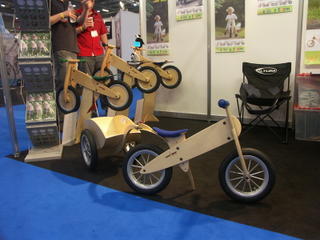 Trek and Specialized had big stands as usual, but virtually nothing of interest, really. Decathlon also had lots of stuff there, including some rubbishy kids' bikes - and a trailer virtually identical to mine, though with a different sort of hitch.

The real surprise of the show, though, was Ride Low, a shop that imports the wackiest lowriders and choppers from Taiwan and sells them for virtually nothing! I don't know how road-worthy these things are, but the street cred you'd get in a week would be be worth twice the price!

I headed back home after a couple hours, including fifteen minutes watching the trials competition outside. No big revelations, but the Thorn stand really made it worthwhile - great to see the new stuff there.

See my .mac photo gallery for more pictures.
Posted by Andrew at 5:24 PM