But not exactly as planned...

It all started well enough. I found waypoint 19 from the station easily (I'm following offroad route number 3 from Nick Cottons book of rides north of London). and the riding was gorgeous, too - after a bit of busy road, it was all forest tracks with solid surface carpeted by freshly-fallen leaves. Couldn't have been better. 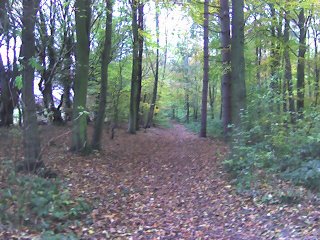 Then things took a turn for the muddy. After about a half hour, I started an interminable uphill on a surface of what seemed to be congealed motor oil. My Paselas are great for most terrain, but not this. After reaching the top of the climb, my mudguards were so crammed with the stuff that the wheels wouldn't even turn as I pushed the bike along! 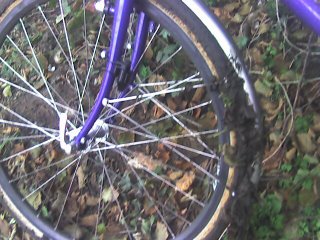 No real choice then but to take the wheels off and scrape. Or as Gemma would say (more appropriately, even), scoop. Things definitely worked better after that, but I decided it would be wiser to stick to paved roads for a while.

I knew I wanted to head towards Bovington anyway, so I just followed signs along pleasant B roads and found my way there after a bit. Along the way, I noiced that my cyclometer seemed to be acting funny - must be the quarter inch of mud packed around it.

At Bovington, I went into a little shop for a sandwich, figuring that the police car parked out front would mean it was safe to leave my bike for a sec. Inside, the copper was watching the security video with one of the proprietors. I paid he other one for my sandwich with my last two pounds and asked where the cash machine was, and he said "it's nicked!"

I figured I'd better head back to my bike... And on the way out I heard them calling after me "let us know if you see it!"

It was getting colder then, and I didn't want to risk going wrong, so I took a reliable B road to the Grand Union Canal, which eventually took me back onto the planned route. Lovely riding along there, with lots of swans, anglers, and narrowboats with fires going inside.

I stopped along the canal after a while to eat my sandwich (I'd been fueled exclusively by peanut M&Ms for far too long at that point). Not too long after that, I saw the landmark I'd been looking for and popped off the canal right at King's Langley station.

So, while not exactly as planned, it was a beautiful ride on a less than beautiful day. The big question now is how I can clean my bike before taking it into the house!