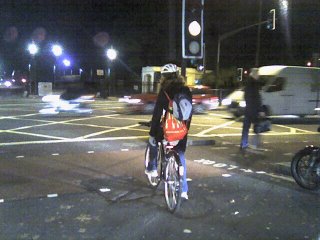 I was cycling home last night from Piccadilly Circus and I was joined by a girl cycling up Regent Street as I was. It was immediately clear, though, that we had entirely different philosophies. She took every opportunity to jump the light, ride through walk signals, and inch out into traffic where possible.

She wasn't aggressive like as messenger, just a careful commuter exercising what she believed to be her right as a cyclist to do whatever she wanted. I had a bit of energy, so I was riding fast from one light to the next, and had no trouble keeping up. Instead of saying something to her, though, I just made her life difficult where I could: blocking the space between the curb and car at a light, forcing her to wait behind me; or overtaking at times that might have been inconvenient for her.

Petty, sure - but it did make me feel a little better. Here's a photo of her waiting for a chance to sneak across the Marylebone Road into the park.
Posted by Andrew at 4:54 AM