I had to ride up to Crouch End for a meeting the other day, and it was a great opportunity to try out the new cycle mapping utility on the Transport for London website. All in all, it works really well!

The tool itself is really clever; it's the same one we use to figure out routes on public transport - only choosing the "cycle only" option. It generates a nice PDF doc with an overview map, and then detailed pages with clear maps and step-by-step directions.

The route I tried is a tricky one, with Hampstead Heath between me and my destination. It ended up being about 2km longer than Multimap's route (for cars), but it sent me via the cycling paths through the Heath, and a long stretch along the lovely Parkland Walk from Highgate to Crouch End.

There were only a couple wierd bits in the route it came up with for me. First, it identified two cycle-only paths along the Finchley Road where no such things exist, and it recommended that I turn right at the Camden Arts Centre, when that's clearly not allowed. 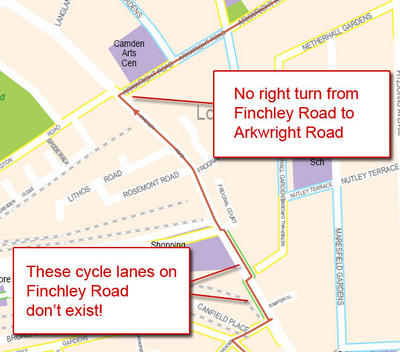 And the only other problem was getting onto Parkland Walk in the first place, which is always a bit troublesome.... but I got there in the end! 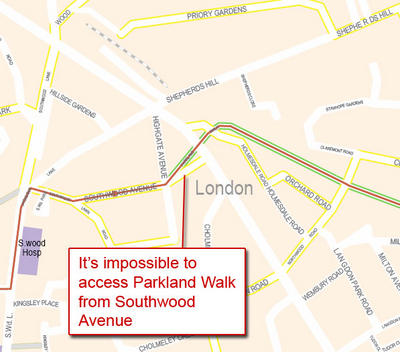 I just wanted to let you know, I’ve posted the first Net Notes column in the Ham&High’s new weblog this afternoon...
http://www.hamhigh.co.uk/content/camden/hamhigh/default/weblog.aspx

...and there’s a link to your weblog from it.

Just thought you’d like to know, and I hope that’s ok by you.

ps. If you have any idea where our lost shed (as featured in the Hamblog) may have come from, please don’t hesitate to let us know.